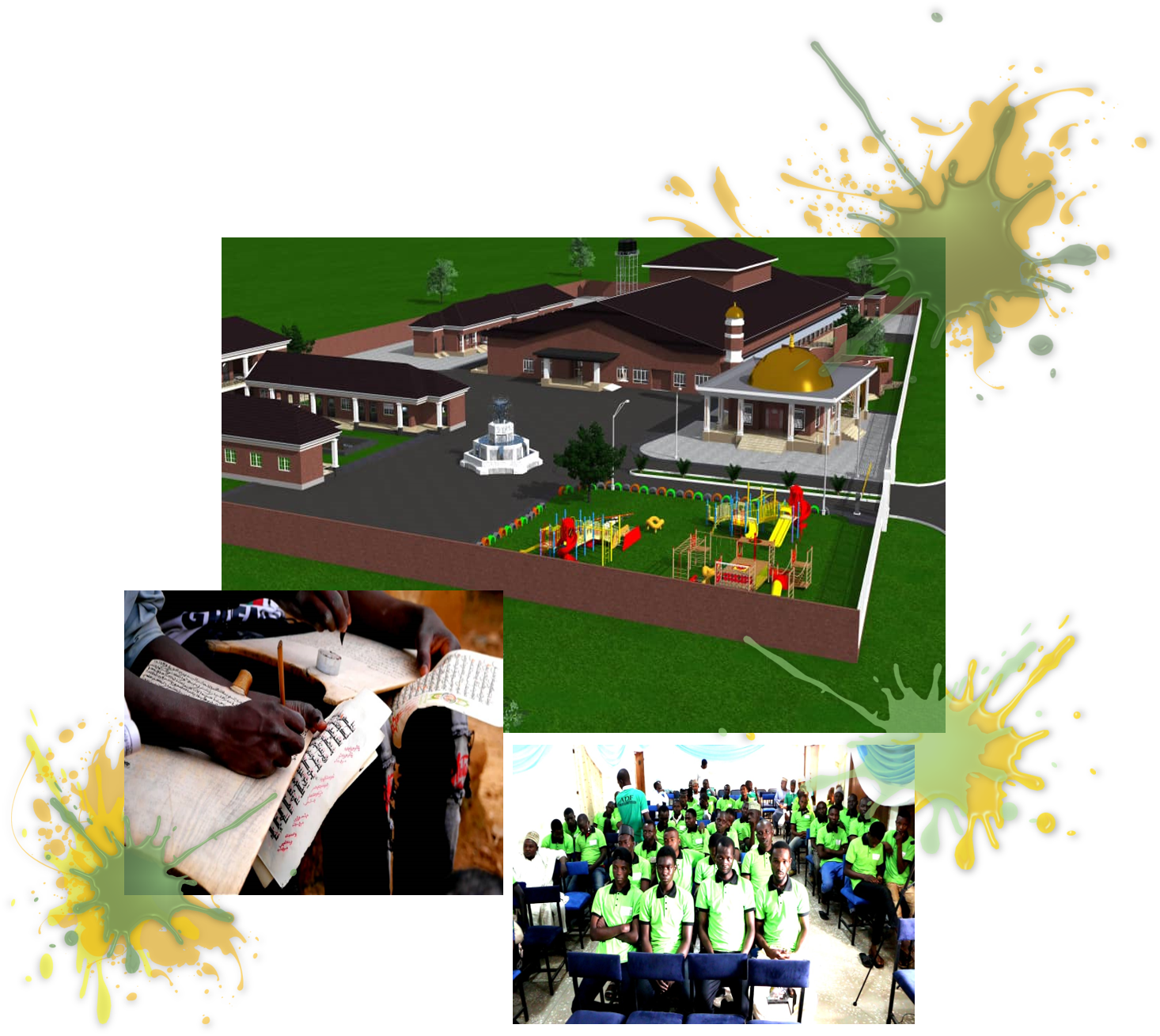 This is designed to transform the traditional Tsangaya [Qur’anic] learning system into a productive educational system that trains young children to become well-educated in Islamic matters. It also offers instruction on western education agricultural and vocational training. It has six basic components

The development or adaptation of syllabus for Islamic Education, agricultural training, basic literacy and vocational training.

Multipurpose farms are to form a fundamental part of each school to be utilized as agricultural workshops and cultivated by youths to meet their protein and carbohydrate needs. Excess produce will provide consistent revenue for youth upkeep and general expansion of the school and the program of economic reform.

Gifted pupils are to be provided with specialized and accelerated development programs in partnership with tertiary institutions.

Creation of a legitimate channel for absorbing itinerant Almajiri boys into the school system under proper guidelines for parental support.

Teachers in the traditional set-up of learning are to participate in capacity building programs to be empowered in the proper discharge of their responsibly.

This is an intensive approach towards achieving a total rehabilitation of aimless youths and absorbing them into the productive mainstream society. It is designed to be carried out in yearly batches within training sites that are specifically constructed with mosques, clinics, workshops, canteens and other basic amenities to ensure the effective implementation and success of the program. It has five basic components 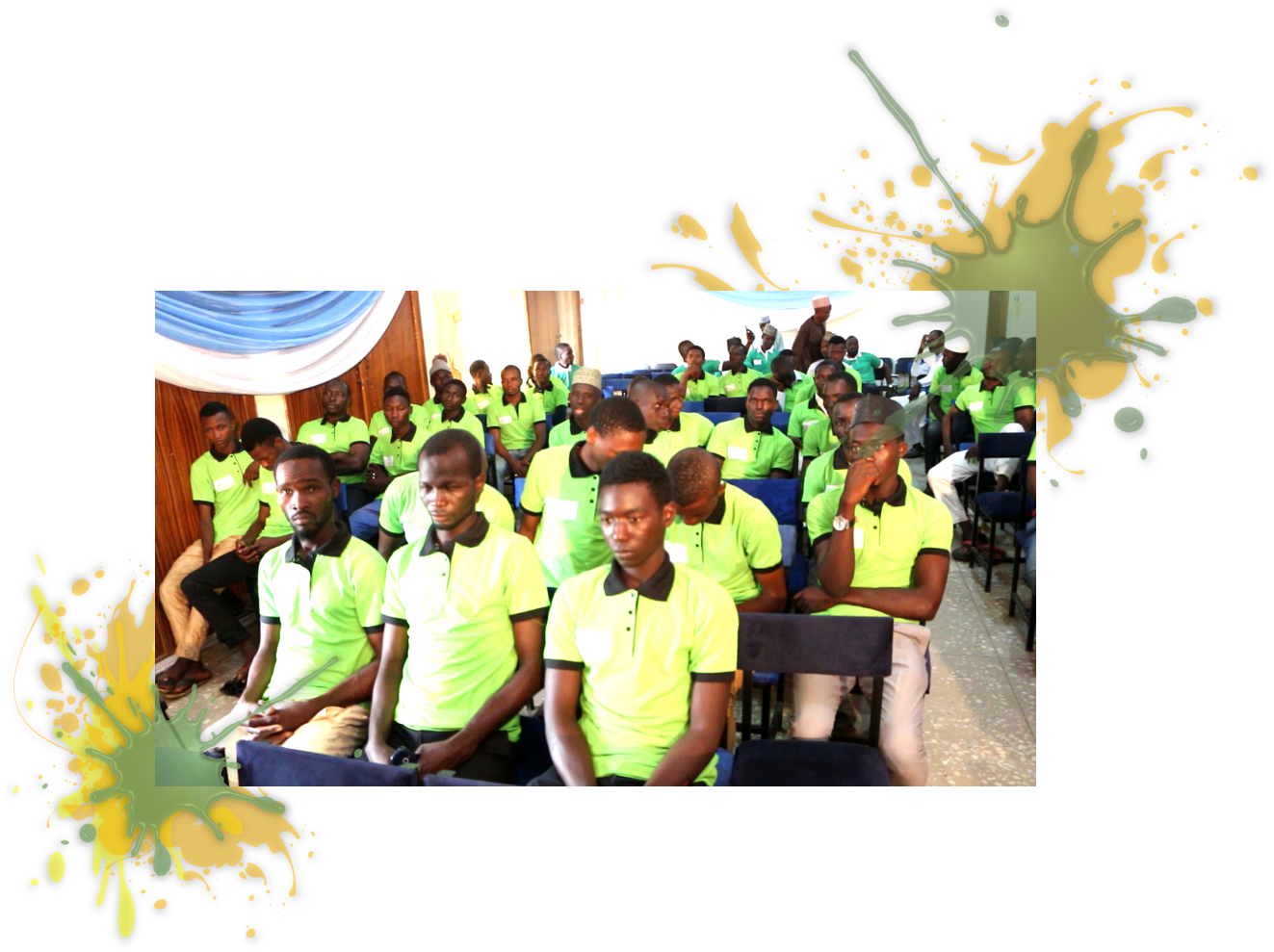 This is to provide basic meals, free medication and transportation to training sites or accommodation on site as the case may be.

This to be carried out within the training sites to rehabilitate youths that are involved in drug and substance abuse.

This is to be carried out by religious teachers and counselors to instill a positive attitude which will lead to a gradual change of values among the misinformed youths.

This is designed as a special incentive for the participants, to enable them to own low cost houses by proving land, building materials and technical support to enable them to build simple attractive cost effective adobe houses at the end of the successful completion of the training and rehabilitation program.

This is designed as a special incentive for the participants, to enable them to own low cost houses by proving land, building materials and technical support to enable them to build simple attractive cost effective adobe houses at the end of the successful completion of the training and rehabilitation program. 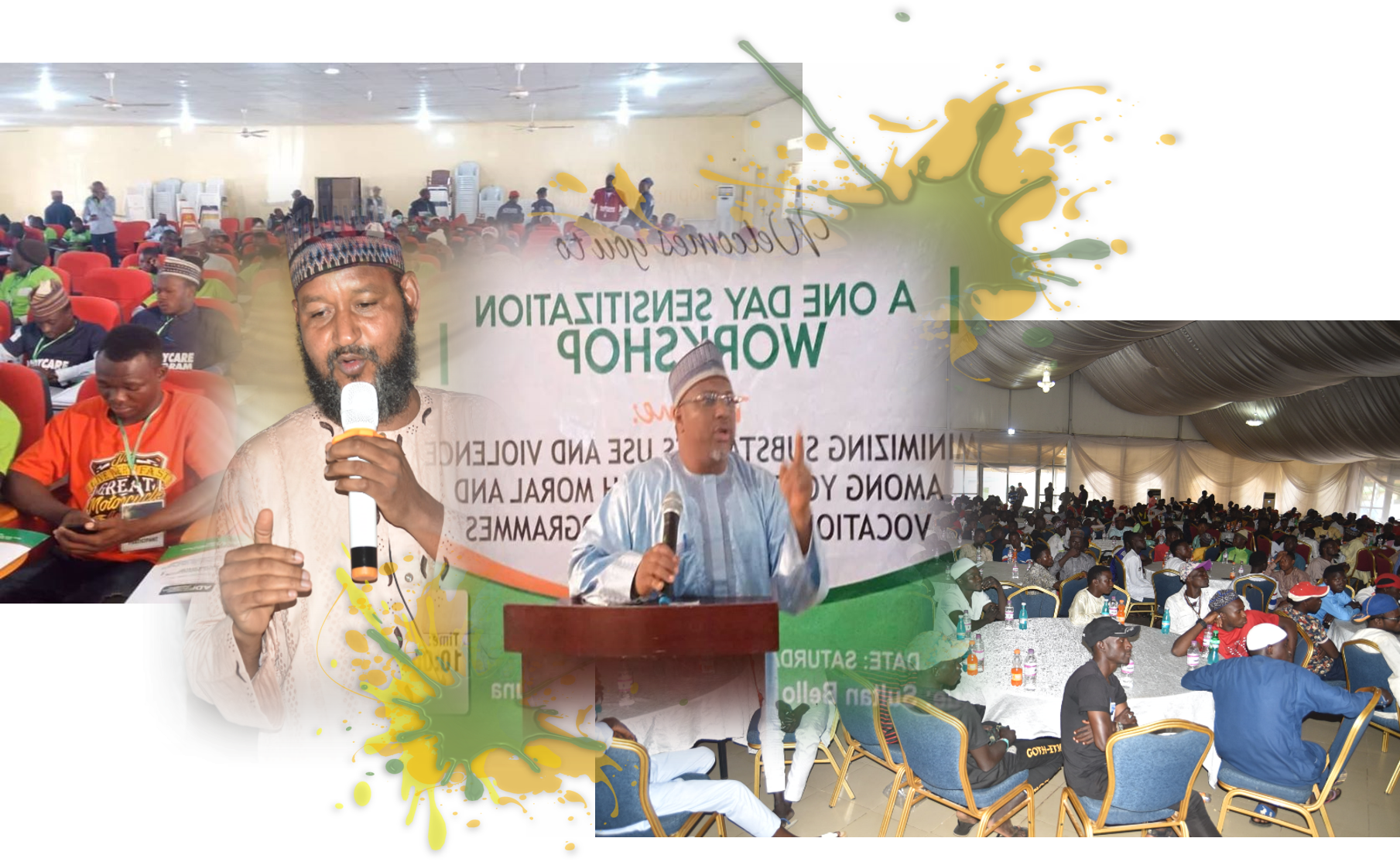 This program is designed to foster a deeper understanding of Islam in the hope that it leads to a transformation of social values within Muslim societies. Improved moral consciousness amongst Muslims is aimed at through the following activities

This is an incessant campaign through the Social Media and other means of publicity to publicize the truth about Islam and propagate the religion in its true sublime form.

Imams of Mosques are to be registered for periodic capacity building programs and economic empowerment to enable them to discharge their leadership role effectively.

This is a platform to develop understanding and mutual respect with people of other creeds.

Under this initiative, simple comprehensive ways are to be devised to support and empower women with various challenges.

Al-Ummah Development foundation seeks immediate socio-economic changes in Northern Nigeria through moral reform and progress in agriculture and technical expertise. Its intervention programs are designed to mitigate further decline and offer practical solutions that accelerates a positive revival in Northern Nigeria. Sound moral conduct was behind the previous successes of Muslims in Nigeria, therefore Islam is key to restoring progress in Muslim societies. Al-Ummah Development foundation has developed a reform mechanism to transform Almajirai and Redundant youths by providing Almajirai in Tsangaya Schools with proper Islamic scholarship, Western education and Vocational training, and redundant youths in the streets with a specially designed incentive-driven training: These training in agriculture and various skills\trades will provide the means for job creation, serving as alternative source of wealth generation to boost Northern economy. The transformation programs will function within an expanding network that is expected to span the entire Northern states within a very short period [ISA].

To engender ethical conduct that leads to a morally reformed society./h5>

To embolden progress and productivity as well as create a platform for peace and mutual advancement with people of other religions and races./h5>

To establish sustainable corrective systems that will engender a reformed and progressive society./h5>

To foster the re-emergence of productivity by rehabilitating youths and engaging them in gainful employment instead of idleness in peaceful times and militancy in political, religious or ethnic crises.

To engender a focused and value conscious Muslim society as well as create a platform for peace, reconciliation and mutual advancement with people of other religious creed and races.

Northern Nigeria occupies 70% of Nigeria’s land mass along with its huge solid mineral deposits and rich arable land. In the 1960s the Northern cities where what formed the agricultural back bone of the nation’s wealth; the agricultural sector employed over 70% of the labor force and export crops was responsible for 62.2 % of Nigeria’s foreign exchange and 66.4 % of its GDP.

Historically agriculture has been the mainstay of most viable civilizations all over the world and in recent times, many developing countries in the Middle East, Asia, Latin America and Africa have turn to agriculture to rapidly transform their economy. India for example has invested deeply in agriculture, its share of the world’s agricultural export market stands at 1.9% compared to1.16% the share of all Africa combined and in recent times it created over 13 million jobs expected to rise ultimately to 30 million jobs in agriculture and related businesses over an estimated period of time.

In Nigeria, the agricultural potential is highest in the Northern part and it is sufficient to catalyze economic revival in the nation’s diversified economy. When this comparative advantage is fully exploited, Northern Nigeria will achieve a complete regional economic rebirth [ISA].

The reform program of ADF is tied to agricultural utilization which will form the basis for economic revival and strength. Agriculture and the entire value chain in agribusiness shall be exploited and properly harnessed to benefit the youth entrepreneurs and impact on the economic well being of the region. Other training and absorption programs in mining, trading and technical skills will advance the youths in various ventures as well enable projects in clusters to harvest at optimum level human and natural potentials; these will eventually broaden the source of income beyond what accrues to Northern States from the nation’s oil revenue.

The categories of youths known as Almajirai are also a primary target for the activities of ADF, their program of reform will ensure that they obtain proper religious education, Western education and vocational training to support their future growth and the collective development of their region. The programs of ADF are created as a supportive mechanism of progress to be maintained by the joint efforts of family units, governments and the wider public to commence socio-economic reform, preserve progress and stop societal decay on a regional scale.

The programs of ADF are holistic programs of moral and economic transformation designed to bring about religious consciousness, social refinement and economic overhaul. Millions of Northern youths will be rehabilitated to respected individual and trained to be absorbed into the economic mainstream [ISA].

We can't help everyone,
but everyone can help someone